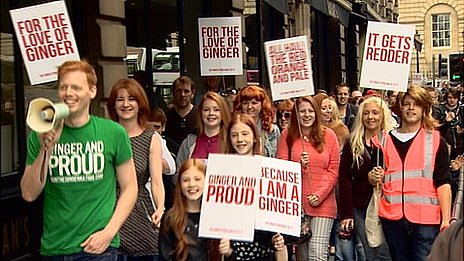 Ok, so you’ve heard it all before but really, my hair is strawberry blonde. In the summer it goes blonde and in the winter it takes on a definite turn for the red, or ginger if you prefer but by balance that still means that for most of the year it is ‘strawberry blonde’.

I’ve never really bothered about it to be honest, preferring to go ‘au natural’ as opposed to dying it and have cousins who have the most amazing red hair. I also have friends who are proud to sport a full mop of ginger loveliness, which if rumour be true is proposed will be a thing of the past in years to come.

I know that some people think that to have ginger hair would be a nightmare but I’ve never found it to be a problem and if anything it is more a source of conversation than anything else. I don’t find it offensive and have never been insulted or bullied – other than by my brother but he doesn’t count and has a ginger beard anyway so could never be considered ‘gingerist’!

Understand therefore my excitement when at the weekend, while catching up on the news, I found an article which appeared on the BBC website in honour of the first Ginger Pride event – yes indeed people, a mass onslaught of ginger ninjas pacing the streets of Scotland to share in their love of their hair colour!  AMAZING.

Now I’m not going to be taking to the streets anytime soon, or joining any mass collaboration of ginger activists, but I thought this was a fantastic way to get a point across – some people really are ginger and proud.

The only thing that was missing was the opportunity for brands to jump on the back of it. Surely there was a ginger beer or ale that could have benefitted from an association? Simple, but fun. I think this should become an annual event with more celebrities involved and a ‘cutest ginger baby’ competition. You can just see the pictures!

Twitter would be a great avenue for this to encourage the campaign to go global, all you would need is a creative hashtag and the world would be your ginger coloured oyster. I can’t wait to see what happens next year, but then as a strawberry blonde perhaps it’s nothing to do with me?