I am a self-confessed lover of all things documentary; anything that focuses on real life and gives me an insight into the way that others live gets a thumb’s up from me. Some people say it’s because I’m nosy but if I’m honest I think it’s because I’ve always had an genuine interest in behaviour and social psychology.

During my PR degree (back in the day) one of the modules we were taught was Social Psychology and my dissertation focused on the power of positive persuasion through communications techniques when encouraging an individual to donate to charity.

Now, this is all well and good, and I expect many of you are wondering what I’m going on about but the thing is that the way people choose to communicate fascinates me, the way that individuals interact, engage and share messages in so many different ways.

All this said, I never for one second thought that a television concept which revolves entirely around people watching people watching TV (did you get that?) would catch on, never mind be of any interest to me what-so-ever.

And this my friends is where I was wrong, very wrong.

Gogglebox, for those of you who haven’t seen it, is a programme which features every Friday night at 9pm on Channel 4. It shows the reactions of families in houses up and down the country to news, films, soaps and general TV viewing and it is brilliant. 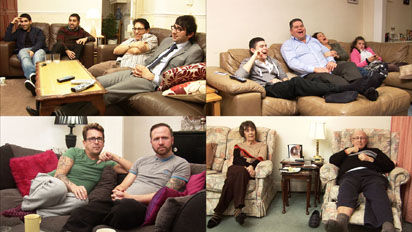 The idea is that you watch how each of these families reacts in their own environment. Obviously the production team have chosen very different and interesting characters to make it all the more compelling with ‘the couple’ who own a bed and breakfast and spend much of their time drinking to a tea swilling vicar, her husband and dog or the friends who eat a takeaway fit for a small street between them, right through to the loveable Leon and his wife June.

When I first came across the programme I expected to dismiss it as rubbish but beyond the laughs and giggles that are to be expected as a result of a programme like this, there is a very thought provoking analysis that each of these households, despite in some instances being just a few miles apart, interact very differently.

The way that each family engages and even addresses each other, to what they eat and wear, along with the comments they make about the programmes, which can be anything from politics to prison break, result in varying degrees of discussion.

What I find really insightful is that in most instances the families are communicating the same feelings on a given topic – some through debate, others a single gesture such as a nod or grunt and others with borderline argument, despite them actually agreeing with each other.

I wouldn’t like to think that the producers introduced more elaborate people to the show, making it more of a Big Brother spin-off, as I feel the characters that currently feature provide a really good balance. Adding any more extremes would make it less credible and I like the fact that ‘normal’ people are giving their opinions about everyday topics; it simply makes it all the more inviting.

It’s almost a modern version of Points of View but filmed in ‘real time’ as it happens, and then aired at a later date.

Well done to Channel4 for such a compelling show with so many layers of intrigue and entertainment value, other stations really should be considering how they compete with a programme that is so widely liked by such a diverse demographic.

I’m already excited by the prospect of what will feature in Friday’s show and for any PR people out there, when your coverage features and is discussed you know you’ve made it. Never mind Have I Got News For You, the challenge is now Gogglebox!